Myanmar is in conflict: We are after the guarantee of non-recurrence

‘The Myanmar government has evacuated at least 4,000 non-Muslim villagers amid ongoing clashes in north- western Rakhaine state, the government said, while thousands of Rohingya Muslims fled across the border to Bangladesh’. This was what was reported in the U.K  guardian on 27  August 2017. Neither the news of that kind nor the persecution on Rohingya is any new to the globe. How can we ensure the non-recurrence?

The country is in conflict. The facebook and other social medias are publishing, everyday, the news and images of persecution of Rohingya in Myanmar. Victims count from the sick and aged persons through children. Violations of international humanitarian laws are every day’s news. People of the globe are keen to see the violators are not above the law.

We are all the stakeholders to the Sustainable Development Goals. One of the goals is to promote peaceful and inclusive societies for sustainable development, provide access to justice for all and build effective, accountable and inclusive institutions at all levels. We, of course, cannot achieve the goals without partnerships. When we are stepping forward for a future, the conflicts in Myanmar pull us backward to a situation where there is no order. The situation is so abnormal that it is governed by the international humanitarian laws.

One of the rules that we have got from the CustomaryHYPERLINK “https://ihl-databases.icrc.org/customary-ihl/eng/docs/home” international law is that the parties to the conflict must not attack civilians and must always distinguish between civilians and combatants and civilian objects and military targets. As the sick and aged persons and children are not and or  can not be combatants the parties to the conflicts surely violate this particular rule when they attack on them. 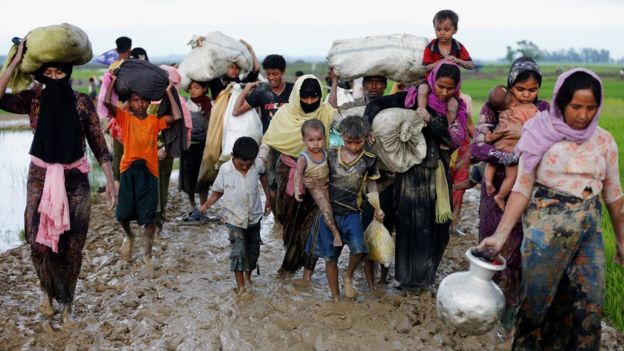 Civilians, in Myanmar, suffered a lot by the parties to the conflict. Now it is the time to check if their sufferings come within the ambit of the war crimes and the crimes against humanity. If they do, the offence  could be tried by the ICC. However, as the Myanmar  is not a member of the court’s statute the ICC has no jurisdiction unless the situations are referred to it by the UN Security Council. In the Security Council the incidents of Veto might stop referring a situation to the ICC. And even in that case, I would examine if there is any alternative left for us that we could recourse to.

Pointing at the humanitarian catastrophes one might argue that in case of the failure of the Security Council the doctrine of R2P and ‘Uniting for peace’ would be the basis for the General Assembly to intervene the situations in Myanmar. The doctrine R2P was developed by an International Commission on Intervention and State Sovereignty (ICISS) following the failure of the international community to prevent humanitarian catastrophes in Rwanda in 1994 and Srebrenica in 1995.  In 1950 the General Assembly adopted resolution 377(V), referred to as “Uniting for Peace” under which, if the Security Council fails to exercise its primary responsibility for the maintenance of international peace and security due to the lack of unanimity amongst permanent members, the General Assembly shall consider the matter immediately and may recommend collective measures including the use of armed force where necessary to maintain or restore international peace and security.

The news tell us that the victims are fleeing towards the neighbouring countries for refuge. This is what they primarily need. The principle of non- refoulementmeans that all States, whether or not they are party to a particular human rights and or refugee convention, are obliged not to return or extradite any person to a country where the life or safety of that person would be seriously endangered. Inspite of the unwillingness towards the unwelcoming advancement of Ruhingya, the neighbouring countries have to accept the arrival and it is the lesson of the principle mentioned above. People of the globe want a guarantee of non-recurrence of such happenings.